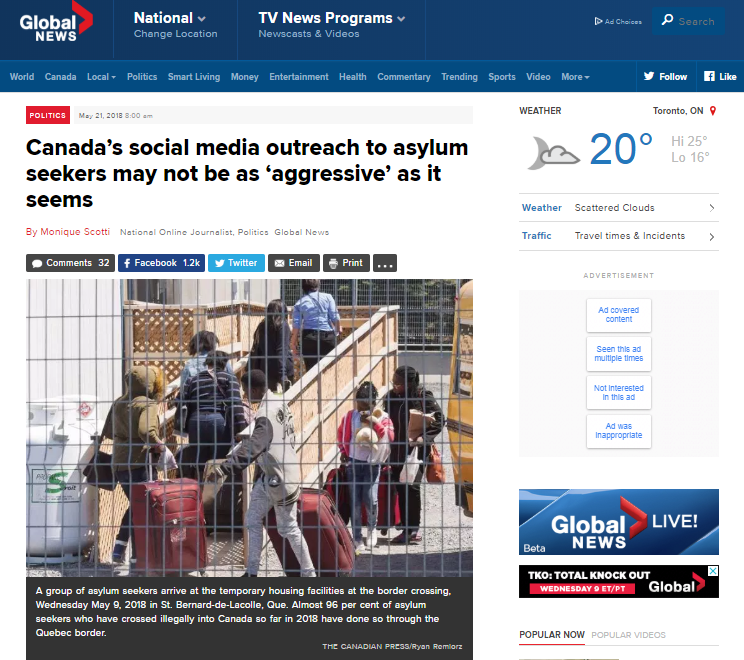 Canada’s federal government could be doing a better job reaching out to people who are thinking of crossing the Canada-U.S. border irregularly and claiming asylum, experts suggest, and it could start by actually paying for ads on social media.

The ad buys that have been made in connection with the border crossings have been limited to search engines like Google, Global News has confirmed, with little attention paid to promoting the message that “there’s no free ticket to Canada” on social channels, where a lot of misinformation has been spreading.

Ottawa has not spent a dime, for example, on the biggest social media juggernaut of all: Facebook.

“We’ve seen this with the fake news in the U.S. election, that social media is very powerful,” said Jonathan Simon, an expert in digital marketing and visiting professor at the University of Ottawa’s Telfer School of Management.

Since last summer’s large influx of people crossing irregularly into Quebec, Immigration Minister Ahmed Hussen  has repeatedly stated that Canada is engaged in different kinds of outreach to correct the record about the ease of coming to Canada.

Part of the campaign has involved in-person visits from MPs to communities in the U.S., and a recent trip to Nigeria for Hussen himself. But the government also says it’s been doing targeted “social media” outreach, something that Hussen confirmed is “ongoing.”

Documents tabled earlier this month in the House of Commons tell a somewhat different story.

They outline all spending on Facebook advertising and promotion by federal government departments since the beginning of 2016, and confirm that between them, the immigration department, the Immigration and Refugee Board of Canada (IRB) and the Canada Border Services Agency (CBSA) haven’t spent any money to promote their message about asylum on Facebook.

According to Adolfo Montenegro of Toronto’s Digital Marketing Xperts (DMX) firm, these free posts are virtually useless. People typically need to already be following the accounts to be exposed to them, for starters.

The government isn’t shy about Facebook spending in other arenas. Overall, it’s spent tens of millions on the platform, and the immigration department alone has spent $2.06 million since January 2016. But that money was all for ads explaining Canada’s new electronic travel authorization program, settlement services for newcomers and the Syrian refugee program.

Over at the IRB, there was no Facebook spending at all for any reason, and the CBSA recorded $133,911 in Facebook expenses for staff recruitment campaigns.

A spokesperson for the immigration department explained that rather than using social media ad buys, the government has been focusing what’s called “search engine marketing” to reach potential asylum seekers.

Ottawa spent a total of $69,717 in the 2017-18 fiscal year, spokesperson Beatrice Fenelon noted, so that government ads pop up when people in certain U.S. states like New Jersey, California, Pennsylvania and New York search Google for keywords linked to Canada’s asylum system.

The ads usually aren’t seen by Canadians as a result. The department is now “assessing the next phase” of a similar search engine marketing campaign for 2018-19.

Advertising like this does have advantages, according to University of Ottawa expert Simon.

What’s good about it, he said, is that most people do use Google and when they plug in the chosen search terms, the ads will reliably pop up. It’s harder, and more expensive, to do that kind of micro-targeting on social media.

“You’re going to get a more targeted, interested approach.”

But there are drawbacks, too.

It only makes sense to try and correct the record about seeking asylum in Canada in the same social-media space where the misinformation is spreading, Simon noted. Facebook’s advertising structure allows you to target based on geographic area or people’s interests, he said, and you can test multiple ads while paying as you go. The government could easily combine that with the existing Google efforts.

Montenegro, meanwhile, was somewhat taken aback by the small amount of money spent so far on the search engine marketing, saying it more closely resembles the cost of a test campaign.

But she said there’s a larger issue. A lot of the information being circulated to potential asylum seekers isn’t untrue at all, Rempel argued, and it makes Canada seem very appealing. Over 7,500 people have crossed the border between checkpoints since Jan. 1, 2018, a significant increase over the same period last year.

“If somebody illegally crosses the border into Canada, they can make an asylum claim,” Rempel said.

The IRB has been working to speed up those processing times, the Liberals have countered, and efficiency has already improved by up to 40 per cent.

Still, Rempel said, the government can spend as much money as it wants on ads, “but the reality of how people can enter the country and then stay here, even if they don’t have a valid asylum claim, is the problem.”