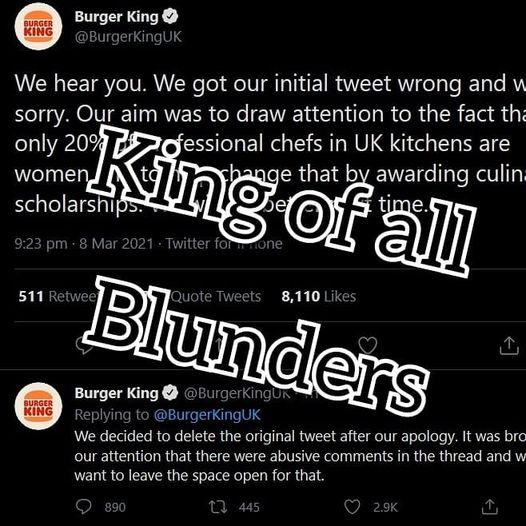 With yesterday being International Womens Day, many social media accounts for companies were posting about it. From messages thanking their female members of staff, to empowering posts about equality and raising funds for womens rights charities, there was a wide array of social media being used for good.
However, there is always some attempts that miss the mark. This can be from a multitude of reasons. The wrong image or hashtags being used, using a far too informal or insensitive tone, depending on the topic, or in some cases, just the wrong approach altogether.
Yesterday, Burger King’s UK twitter account posted the message “Women belong in the kitchen”. No, that has not been edited. That was the tweet. Just that.
It was supposed to promote the companies new initiative to get more women into the restaurant industry, with the company adding a comment underneath saying
“If they want to, of course. Yet only 20% of chefs are women. We’re on a mission to change the gender ratio in the restaurant industry by empowering female employees with the opportunity to pursue a culinary career.”
The aim was to shock people with the original post, so they would click through to the actual message. Essentially, clickbait. However, what it achieved was instant condemnation and mockery online, with even KFC Gaming urging Burger King to delete the post. The tweet itself quickly saw the replies filled with abusive and misogynistic comments.
After originally trying to defend itself, Burger King took down the post and issued an apology, over 12 hours later. This incident is a perfect example of how the wrong approach and execution can ruin the message, no matter how good it is. Burger King wanted to bring attention to gender disparity in the restaurant industry. Great, a fantastic idea! But now it is forgotten beneath a social media nightmare because of the use of a sexist trope and poor judgement.